Storage system architects have been using data compression and data deduplication to reduce the storage footprint of data for decades. While these techniques have made all flash arrays more affordable the trade-offs implicit in these technologies have limited their effectiveness. At VAST Data we’ve come up with a new data reduction technology based on data similarity that breaks many of those tradeoffs reducing data further than compression and deduplication.

So if we start with the opening to Hamlet’s most famous speech:

for compressed text of:

The other problem with compression is that decompression is a sequential process. Any block of compressed data must be decompressed starting at byte 1. Since storage systems never know which data may be accessed randomly, and since reading 5MB of data to satisfy an 8KB read from the middle of a file would be a bad idea, storage vendors only compress data in smaller blocks limiting compression’s effectiveness.

Since most storage systems use block oriented metadata they can’t take full advantage of compression because once they’ve compressed 64KB of data down to 29,319 bytes they have to store those 29,319 bytes in 8 4KB blocks using 32,768 bytes. Our metadata operates at the byte level so we store 29,319 bytes of data in 29,319 bytes of flash, and start the next block of data at block 29,320.

Where compression reduces small repeating patterns in your data to even smaller symbols data deduplication identifies repeating data in larger blocks and storing only one copy.

As data is written to the system it uses hash functions to identify each data block and determine if the contents of that data block has already been stored, If it has it replaces the new data with a pointer to the old data. Deduplication works well on datasets with a lot of duplicates to eliminate like VDI installations with 100s of copies of Windows, and the patches to those systems Microsoft sends on Tuesdays.

Since deduplication only reduces data that’s an exact match at the block level, smaller block sizes will result in greater data reduction. Even the smallest change or difference between two data blocks will result in storing a whole new block.

Storage systems, therefore, have to trade-off the efficiency of small deduplication blocks against the amount of controller memory they can consume, and the capacity they must support. Some systems use block sizes as large as 128KB to minimize metadata handling.

While compression and deduplication have been useful, we at VAST Data weren’t satisfied with traditional data reduction techniques. Instead of deduplicating data blocks and then locally compressing each one we’ve found a way to use compression globally by compressing similar blocks of data together.

It’s a bit of an oversimplification but you can think of similarity hashes as dictionary suggestions. If two blocks generate similar hashes they’re likely to generate very similar dictionaries when compressed with the same compression engine. 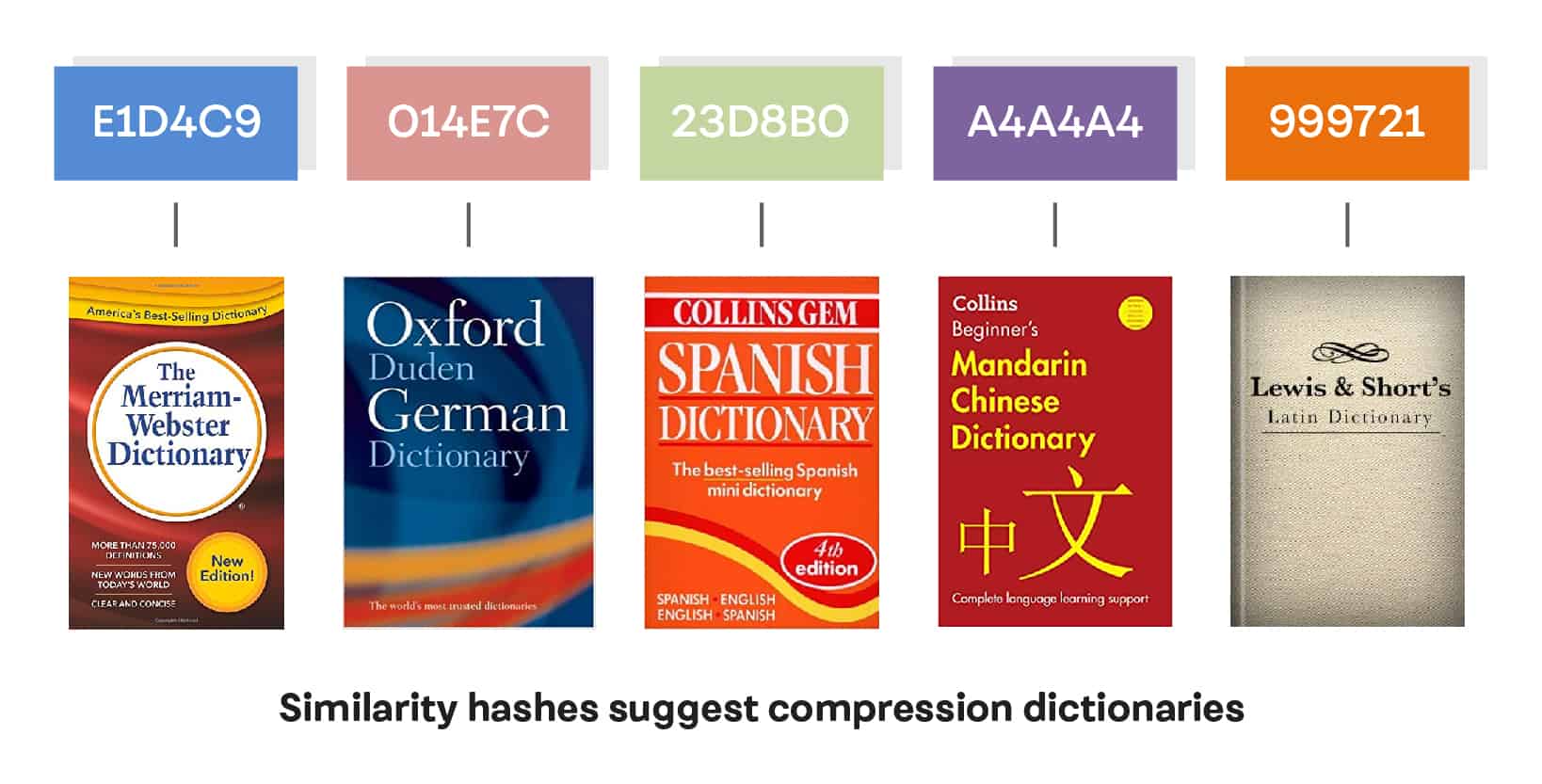 Similarity compression reduces duplicate blocks to metadata like deduplication, and since we use one of the latest and greatest compression algorithms it reduces the small repetitions that compression is good at reducing. Unlike deduplication and compression, it also gets the opportunity to reduce mid-size repetitions between blocks so a change to the quantity on hand in your inventory between snapshots will get stored as a few bytes of delta file instead of 27KB of compressed dedupe block.

When your application writes to a Universal StorageUniversal Storage is a single storage system that is fast enough for primary storage, scalable enough for huge datasets and affordable enough to use for the full range of a customers data, thus eliminating the tyranny of tiers. system’s NFS mount point or an S3 bucket the compute node receiving your request, writes it to multiple 3D Xpoint SSDs in one or more NVMe-oFNVMe-oF (Non Volatile Memory express over Fabrics) extends the NVMe protocol to allow systems to access NVMe SSDs over fabric networks like Ethernet and/or Infiniband as well as PCIe connections. enclosures, and acknowledges the write. The data is reduced and erasure-coded when it is asynchronously de-staged from 3D Xpoint to QLCA class of SSDs designed to deliver the capacity and reliability required by hyperscale storage systems without the additional cost of the “enterprise” features required by legacy storage architectures. Hyperscale SSDs: • Use high bit/cell flash (4 bit/cell QLC and/or 5 bit/cell PLC)
• H... flash SSDs. That means data reduction has no impact on write latency because it happens after the data is safe in non-volatile Storage Class MemoryStorage Class Memory is a new non-volatile memory technology that has much lower latency and much higher endurance than NAND Flash. VAST Universal Storage Systems use Storage Class Memory SSDs to store system and element store metadata as well as as a write buffer..

That 3D Xpoint is also key to breaking the tradeoff between granularity and memory requirements deduplication systems have to make, All the metadata created by similarity compression is stored in the 3D Xpoint in one or more NVMe-oF enclosures. Any compute node can access, or update, any of the metadata directly at any time. Since our system was designed to store reduced data from inception all that metadata points to bytes, not blocks, in flash so we avoid the packing inefficiencies that plague so many storage systems.

While as with any data reduction method the degree to which similarity compression can reduce any set of data depends on the data, some data is just more reducible than other data. To see if global similarity reduction really could reduce data more than standard deduplication and compression we configured a popular backup application to deduplicate, or deduplicate and compress the backups of a set of virtual machines and use a VAST Universal Storage system as the backup target.

The VAST system reduced the deduplicated and compressed backup set by an additional 6:1, when we turned the backup compression off, the deduplicated set reduced 22:1. Your mileage will vary but we took this as a pretty good proof point.

A few additional workloads from our early customers:

VAST’s global similarity reduction can reduce data more than the combination of data deduplication and compression used by other all-flash storage systems bringing the cost per GB of a VAST Universal Storage system down to that of disk-based object stores.

When we used a VAST storage system as a backup target: 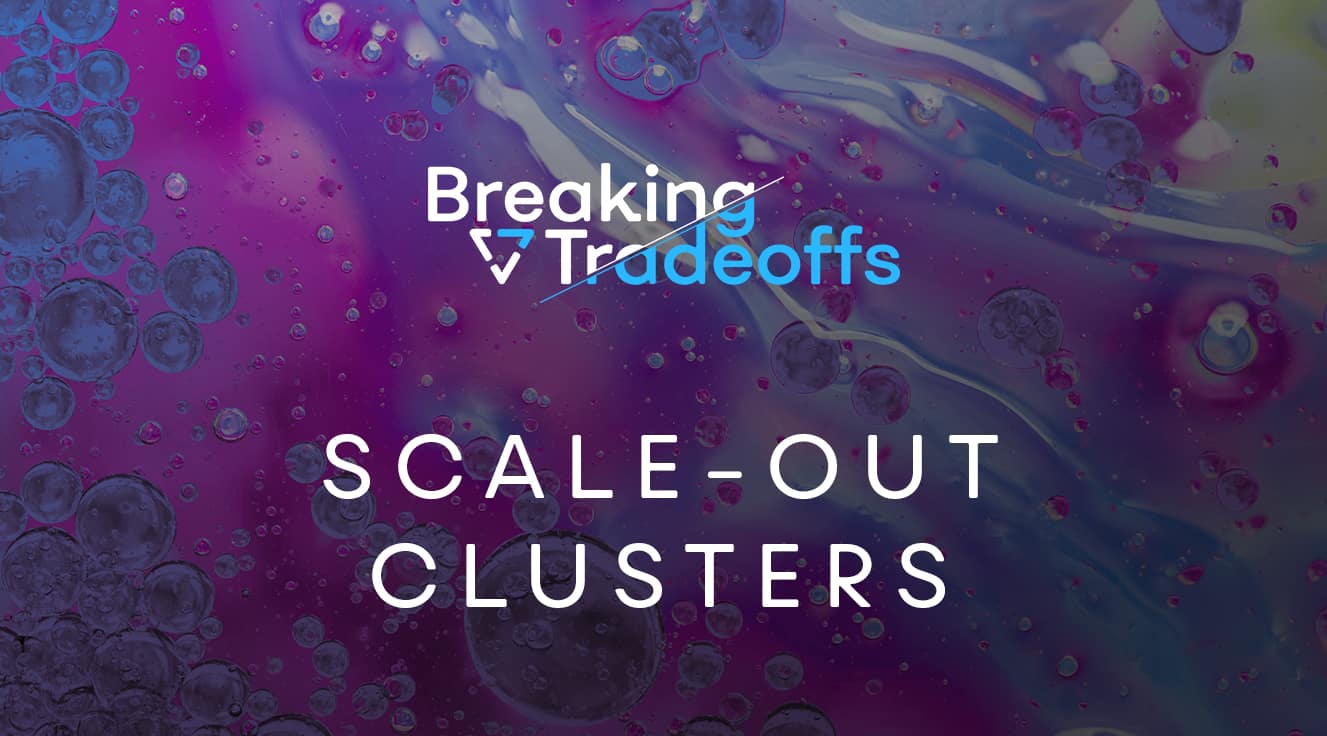 While it should be obvious, we sometimes forget that storage system architectures are defined by technologies that were available when…