Building The Storage Ecosystem For Hyperscale

Since VAST Data first launched, we’ve been on a mission to enable new generations of data center infrastructure that increments the market to greater levels of speed, scale and affordability.  Because our SW does not carry the baggage of legacy infrastructure, we assume the responsibility of promoting new technologies – examples include low-cost, hyperscale flashA class of SSDs designed to deliver the capacity and reliability required by hyperscale storage systems without the additional cost of the “enterprise” features required by legacy storage architectures. Hyperscale SSDs: • Use high bit/cell flash (4 bit/cell QLC and/or 5 bit/cell PLC)
• H..., storage class memoryStorage Class Memory is a new non-volatile memory technology that has much lower latency and much higher endurance than NAND Flash. VAST Universal Storage Systems use Storage Class Memory SSDs to store system and element store metadata as well as as a write buffer., NVMeNVMe is a new protocol designed specifically to provide systems access to non-volatile memory devices like SSDs. NVMe has much lower overhead, and allows much more parallel I/O than the older SCSI protocol. over Fabrics, and more.

One thread of this rethink compels us to think about storage enclosures.  Our architecture has broken the tight connection between SSDs and storage compute nodes (also known as shared nothing systems), and by building the world’s first disaggregated and shared everything (DASE) architecture, we can also re-think how storage devices are managed by modern flash enclosures.

In the hardware space, progress is a constant and VAST is constantly tracking the market. In 2019, we announced support for our first NVMe enclosure (a system codenamed “Mavericks”). This system holds 56 NVMe devices (a mix of SCM and QLCA class of SSDs designed to deliver the capacity and reliability required by hyperscale storage systems without the additional cost of the “enterprise” features required by legacy storage architectures. Hyperscale SSDs: • Use high bit/cell flash (4 bit/cell QLC and/or 5 bit/cell PLC)
• H... NVMe drives), and is based on a PCIe Gen3 server architecture in the back of the enclosure – where two servers provide active/active access to low-cost single-ported drives. In hyperscale hardware terms, 3 years is a lifetime… and since Mavericks has been launched a number of new technology advancements have caught our eye that we believe can provide an even better experience for VAST Universal StorageUniversal Storage is a single storage system that is fast enough for primary storage, scalable enough for huge datasets and affordable enough to use for the full range of a customers data, thus eliminating the tyranny of tiers. clusters. The conundrum we faced, however, was that as a software company we live at the mercy of hardware providers…

How does a software company create a hardware movement? Looking around the industry for examples of proven models, we were inspired by what Facebook, now Meta, pioneered with industry partners to develop the Open Compute Project. The consortium gave voice to their customers and technology partners, sharing what they’d like to see in the expectation that efficient, high-quality infrastructure concepts would create a market for vendors to succeed.

So…we issued the call. We laid out our vision, and asked the industry to rise up to the challenge of tomorrow’s AI-powered data center. Today, we realize the fruits of that collaboration and are excited to announce support for a next-generation storage platform concept called Ceres. 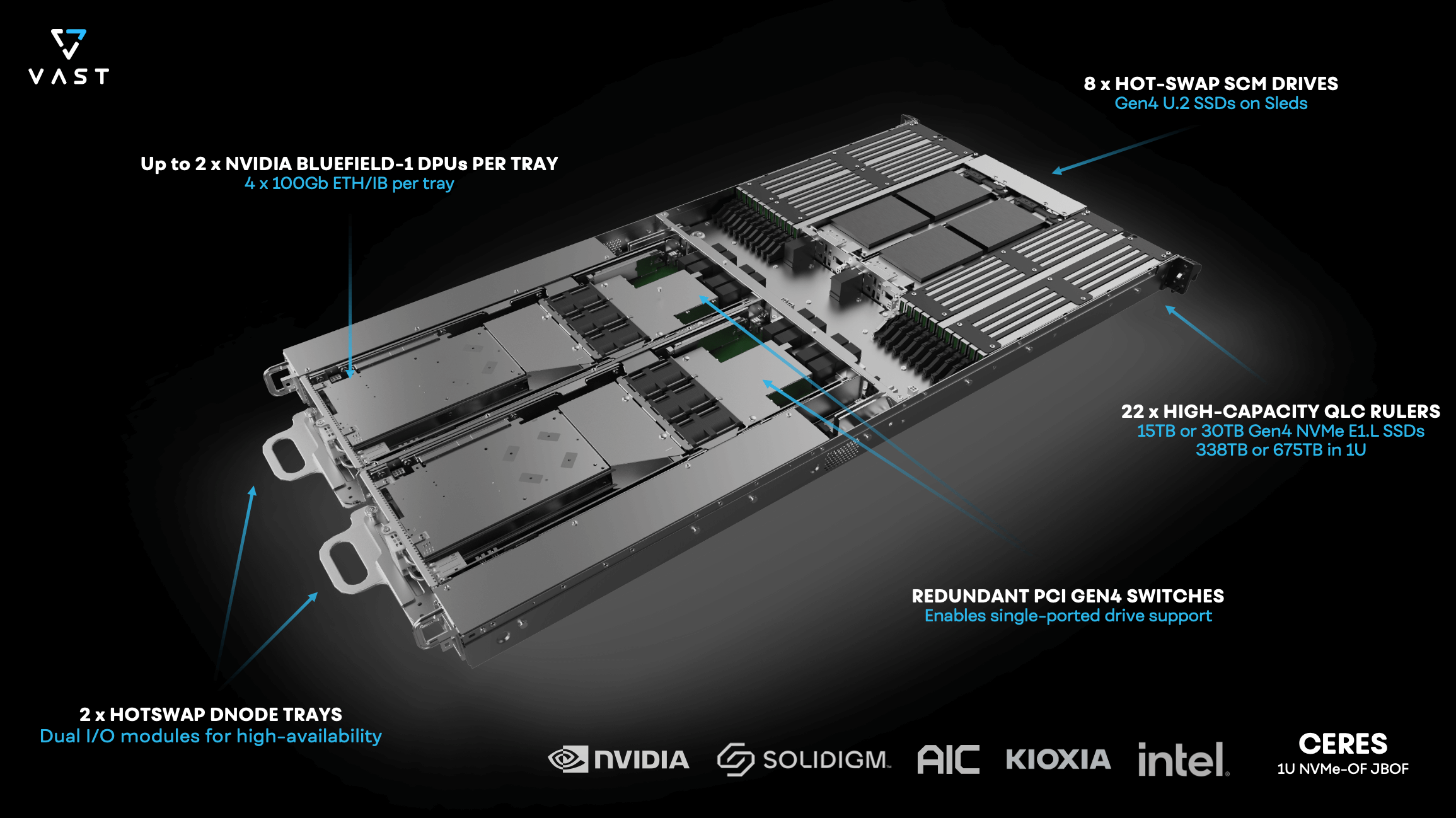 Named after the largest of the small objects in the asteroid belt, Ceres furthers VAST’s mission to equip enterprises and service providers with new capabilities that have otherwise been the exclusive domain of the world’s largest hyperscale cloud builders. The Ceres hardware platform, powered by VAST Universal Storage software, enables customers to adopt cutting-edge technologies to bring new levels of speed, resilience, modularity, and data center efficiency.

Ceres. This is a 1U NVMe JBOF (just a bunch of flash enclosure) with no single point of failure. This little system is a performance powerhouse, capable of contributing 60GB/s and petabytes of effective capacity into a Universal Storage cluster, each. Let’s dig in.

To get started, let’s talk about NVMe device form factors. E1.L SSDs (cleverly named “ruler SSDs” due to their long and skinny form factor) are the future for drive design because they can enable greater transistor density. With 75% more surface area compared to a 2.5” U.2 drive, E1.L SSDs have better cooling and thermal characteristics. That extra space also means that, in the coming years, more flash can be fit onto these devices. Today’s rulers have already surpassed the capability of HDDs (with capacities as high as 30TB), but this is the same as a U.2 device that has less surface area, so we know that it’s possible to stuff more flash in a E1.L device. We’re not thinking of 30TB as an end state, but as the beginning of a journey where you can envision 100TB and 200TB rulers over time. To realize this vision, we concluded that we needed to jump in and help drive the industry adoption of rulers… so, here we are flash manufacturers, let’s party.

Even in today’s ruler terms, Ceres is very dense. Customers can outfit their JBOFs with 10TB or 30TB rulers, and with 22 E1.Ls per system, Ceres can house up to 675TB of raw flash in only 1U of rack space. With VAST’s Similarity-based data reduction algorithms, Ceres can manage nearly 2PB of effective capacity per enclosure with an average 3:1 data reduction ratio.

Next up, we’re big into DPUs. Data Processing Units (DPUs) are also the future of hyperscale storage thanks to their power efficiency, small form factor, and on-board offload engines. When NVMe-oFNVMe-oF (Non Volatile Memory express over Fabrics) extends the NVMe protocol to allow systems to access NVMe SSDs over fabric networks like Ethernet and/or Infiniband as well as PCIe connections. emerged into an industry standard over the last several years, there became a natural opportunity to leverage discrete DPUs to manage flash for disaggregated architectures. Remember – Universal Storage clusters are fully disaggregated. There’s no need for any computational resource in the JBOF – and the sole responsibility of a DPU is to present NVMe devices to the machines that powered our software on the other side of the NVMe fabric. Today, Ceres integrates multiple NVIDIA BlueField DPUs into a 1U form factor that is capable of delivering over 60GB/s of PCIe Gen4 performance per each Ceres enclosure, all while consuming significantly less power and space. 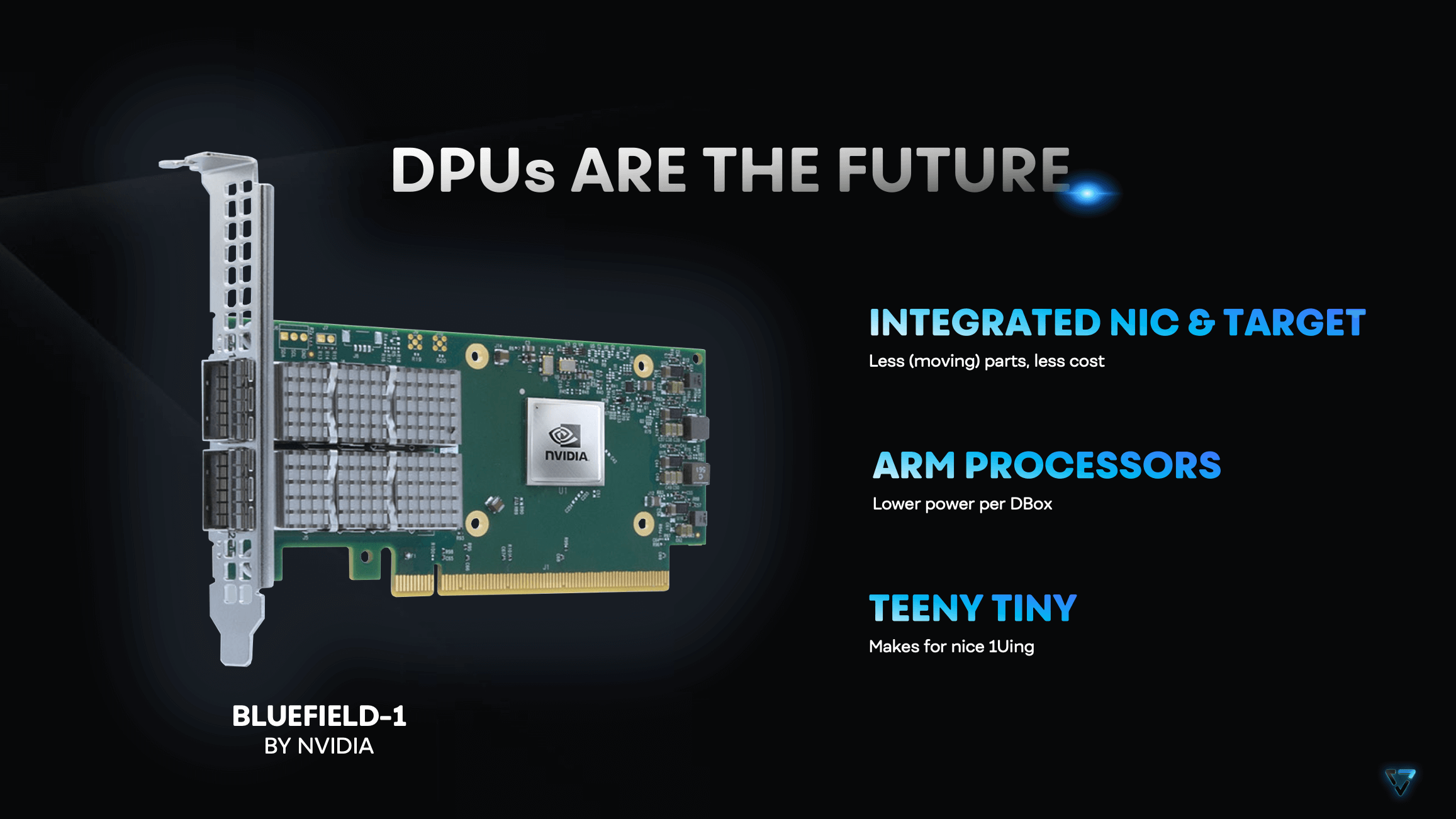 As a result of this industry collaboration, the introduction of the Ceres platform brings welcomed benefits to VAST Data Universal Storage customers centered around key design points:

We’ve already had great interest from the industry. In fact, even before today’s announcement, we’ve taken orders for 170 PBs of Ceres systems, powered by VAST Universal Storage.

Ceres will also serve as the foundation of our NVIDIA DGX SuperPOD reference architecture — a predesigned reference architecture for customers that need large AI infrastructure — fulfilling the vision of NVIDIA’s quest of end-to-end data center infrastructure, from the GPU all the way down to the devices that manage storage SSDs. Our value proposition for customers is a simple, scale-outScale-Out storage systems allow users to grow a system by adding compute power along with media in the form of HDDs and SSDs. Scale-Out storage systems can usually scale larger than systems based on the older scale-up architecture. Compare to Scale-up NAS that delivers supercomputer-levels of scale without sacrificing the enterprise storage experience. Scale is now affordable, resilient and simple.

Lastly, it’s important to remember that VAST has broken from the rigid approaches of yesterday’s scale-out storage providers – our asymmetric cluster architecture allows clusters to add Ceres to clusters that have yesterday’s and tomorrow’s cluster hardware – establishing VAST as a living and breathing entity in the data center that can live through multiple generations of hardware and eliminate the need for continuous cluster refresh events. 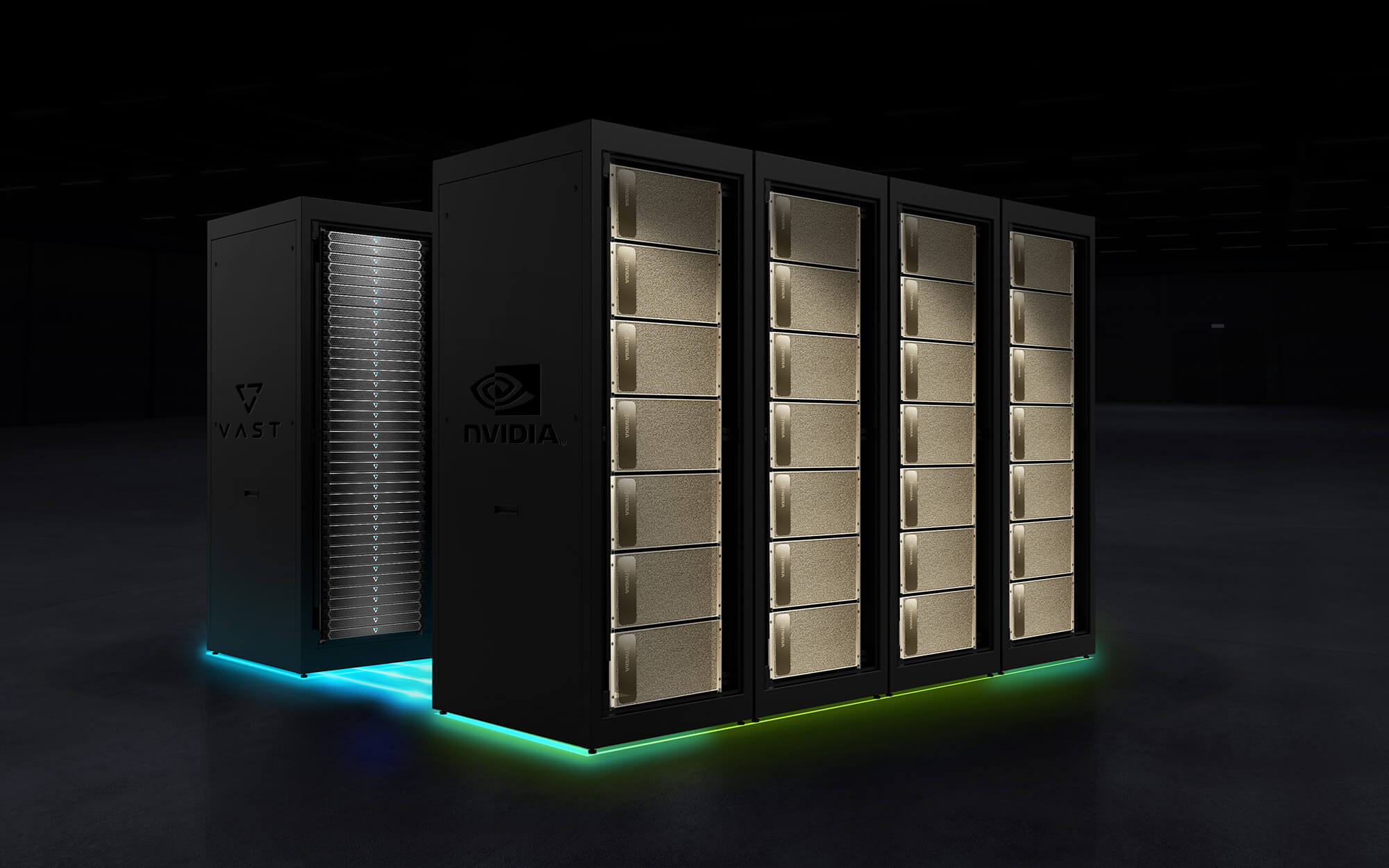 It is with great pride that we unveil today that VAST’s deep learning data platform is in the process of being certified by NVIDIA for DGX SuperPOD, and will be the first enterprise NAS solution to power this turnkey AI data center solution.