Much Ado About Nothing

First, let me say that as an emerging player in the storage market, VAST Data started with only respect and reverence for the early incarnation of Pure Storage. The early leadership team built a great company that executed in a way that can only be described as… great. Pure was the company we looked up to when we started building VAST.

Fast forward 10 years later, and much of that core team has since gone. While some Puritans have since converted to VASTronautism, others have gone off to different pastures. What is left is, well… I’m not sure. But what is clear though is that the shine from the early days of Pure has worn off of the apple.

It’s with both a sense of pride and disappointment that I report today on Pure’s newest FlashBlade//S unveiling. I’m proud because the student is now teaching the master – and Pure is clearly now taking pages from the VAST playbook. Imitation = flattery is the best evidence that we are doing something right. I’m also sad because the announcement they’ve made today is not only disingenuous, it is also uninspiring. It’s simply: not great.

Some context: Since we started selling in 2019 – we generally do not lose deals to FlashBlade, especially if the choice was based on technical merits. As a technologist, I believe that there are only disadvantages to FlashBlade vs Universal Storage when you stack up our respective features, price and scaling/performance capability. But, Pure also has a larger global sales footprint and leverages the portfolio sale to get FlashBlade into the door when customers choose their exceptional FlashArray product. We’re not everywhere, and not every customer buys on the basis of technical merit.

As we’ve been on our winning streak, Pure has been busy prepping this new announcement for months now, and we were all anxious to understand if they’d bring the thunder. I could spend 3 pages writing about all of the wrongs in today’s FlashBlade//S announcement, but I’m just going to say a few things and then go back to slugging it out in the customer boardroom.

Point 1: The disaggregated & stateless claims made by Pure are utterly ridiculous

When a server is connected to an SSD, and the only way to access that SSD is through that server, that server is decidedly stateful. With Pure’s new offering, there is no network-attached access to a logical pool of devices over disaggregated transports (such as NVMe over fabrics) and when that server fails, the devices attached to it are no longer present in a cluster. Pure today announced a “disaggregated architecture”, but what they really mean is that blades now borrow from the same SSDs used by the FlashArray product line and customers have a choice of drive configuration. They’ve normalized their supply chain and have tried to skin it as an architecture improvement. In reality, Pure has now caught up to the Isilon of 2003 with this move, which is when Isilon first introduced nodes with different direct-attached drive options. That’s a step forward from having blades with NAND soldered onto them, but still leaves a lot to be desired.

We announced the world’s first Disaggregated, Shared-Everything architecture in 2019, and this architecture continues to pay dividends in terms of parallelism, lack of cache coherency deadlocks, the ability to execute global efficiency algorithms, true independent scaling of CPUs and NVMe devices… the list goes on. If you want to learn more, read our white paper.

This is a server with direct-attached storage devices on it (aka: a FlashBlade).

Point 2: Pure’s new exabyte-scale system can scale all the way to 20PB

[jeff whips out his TI calculator] [jeff also sucks at math, got an F in calculus… twice]

This is what a cloud of flash using composable, disaggregated storage processors should look like. Oh, and to Point #1, each of our containers (CNodes) are mounting all 3,728 SSDs simultaneously. Our shared-everything architecture is the basis for an embarrassingly-parallel level of scale. Without the classic communication across a bunch of direct-attached nodes as shared-nothing systems have, scale is born from a new and fundamentally simpler system architecture.

Customers are now routinely coming to VAST for 100PB+ clusters. These organizations demand data management simplicity at scale and want to avoid silos/islands of information that come from having small and limited storage clusters. They also want to be able to support full SSD chassis failure, all of which is possible with VAST – but not with Pure. Data growth is a constant, and customers shouldn’t have to plan around architecture constraints or resilience limitations.

If you’re going to advertise an “exabyte-scale system”, it should actually be able to support exabytes of capacity… and they should achieve exabyte-caliber rack-scale resilience. Here’s what an exabyte-class VAST cluster actually looks like, it’s one we’re architecting for an AI hyperscale project:

Point 3: The VAST SCM “crutch” is our not-so-secret advantage

I love Chris Mellor… you always get the direct read-out from the vendor.

“No SCM crutch” as a Pure briefing slide said, possibly in a poke at VAST Data.

Using storage class memory as a shared, global resource allows our system to:

Pure “avoids” the need for SCM by relying on a far more volatile, expensive and limited crutch … which is DRAM. The limited space to manipulate data leaves them, 5 years later, without any meaningful data reduction story. Need evidence?  Look again on the right at all of those super caps. Non-volatile systems such as VAST’s don’t need expensive memory, we don’t need supercaps or batteries.

Just ask them yourself.

Every Pure salesperson is out now evangelizing the merits of this architecture to customers new and old. We agree with their high-level selling points, as they are essentially evangelizing OUR architecture. That said, you can’t will a legacy shared-nothing architecture into becoming modern just by saying it’s modern over and over again. If you find yourself on the receiving end of a FlashBlade//S pitch, ask them a few simple questions:

After five years of waiting for something new, we now see the limits of a shared-nothing direct-attached architecture and how architecture can really limit the evolution of a storage product. I think that’s the key word… “evolution”. While the FlashBlade//S announcement was billed as a “Revolutionary Platform”, today’s announcement is evolutionary, at best.

I miss the old Pure. 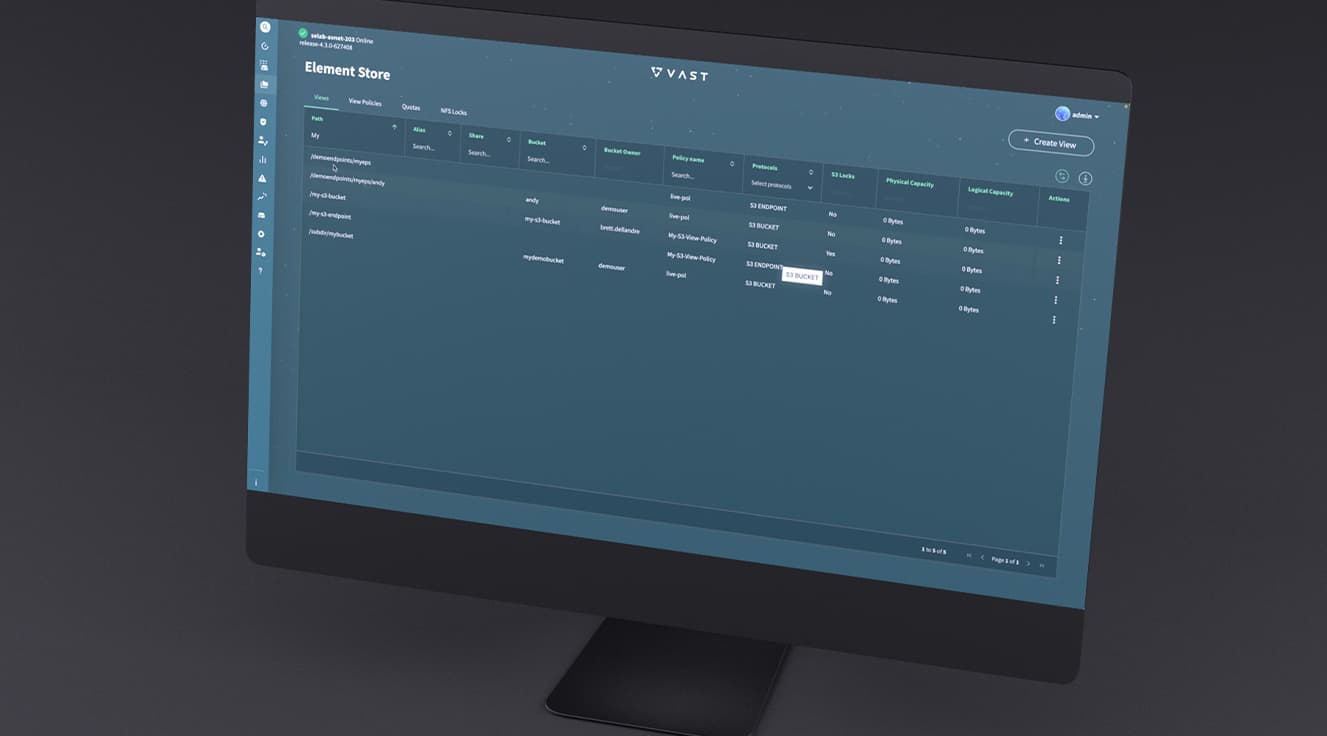 Earlier this year, IDC stated “Not only is [VAST] a vendor to watch in enterprise storage, it is THE vendor…