The world of Artificial Intelligence was rocked circa 2012 by the use of GPU’s in Neural Network processing by Geoffrey Hinton’s team at the University of Toronto – where Alex Krizhevsky’s Ph. D thesis work won the Imagenet object recognition challenge using them. The results, as everyone knows, were stunning – a 15% increase in accuracy overnight compared to other machine learning techniques, and this started an explosion of research and applications in the world of Neural Networks for a variety of purposes, especially in the arena of Convolutional Neural Networks (CNNs), now referred to as Deep Learning.

While doing justice to this vast field is beyond the scope of this article, a good starting point for the reader is the Wikipedia Deep Learning article, which chronicles the history and current state of this field. Yoshua Bengio, Geoffrey Hinton and Yann LeCun were awarded the ACM Turing Award for their seminal contributions to this field. NVIDIA has been at the forefront of this revolution since 2009 with their GPUs as the backbone technology for much of these works.

This prompted the introduction of a set of technologies from NVIDIA using Remote Direct Memory Access (RDMA) to bypass SYSMEM/CPU complex to enable direct communication between GPUs both within a server and with other servers, referred to as GPUDirect. This allowed multiple GPUs on a system, and across systems, to cooperate in training large models. But this still left a limitation in moving data from the IO subsystem to the GPU complex, which traditionally had to use SYSMEM as a “bounce buffer” to get data to  GPU memory.

NVIDIA then began to develop an extension – GPUDirect Storage (GDS) – to enable direct movement of data from the storage subsystem to GPU memory when appropriate, bypassing SYSMEM. A good start to become acquainted with these technologies is the NVIDIA GTC 2020 Conference slides for MagnumIO and GPUDirect for Storage. For deeper details, please study GPUDirect for Storage Design Guide.

So what is GPUDirect Storage (GDS)?

Traditional data flow from Storage to the GPU typically flows through a NIC to the CPU (through a PCIe Switch complex in the larger purpose built NVIDIA DGX Systems) and to SYSMEM, after which it is moved to the GPU memory for further processing, as shown in Fig 1. Unless some pre-processing is needed in the CPU, this is an unnecessary limitation in several ways.

First, it is an unneeded hop for the data between SYSMEM and GPU. Next, the operation required the use of precious CPU resources which could be used for some other processing. Lastly, the aggregate bandwidth the storage can provide to the system is limited by the internal SYSMEM-GPU bandwidth, which is typically significantly less than the bandwidth a well-architected storage system can provide through the multiple NICs on the system. For example, on an NVIDIA DGX-2 system, we have observed that we can get a maximum of around 50 GiB/s on internal bandwidth, while the 8×100 Gb IB NICs can deliver close to twice the bandwidth. 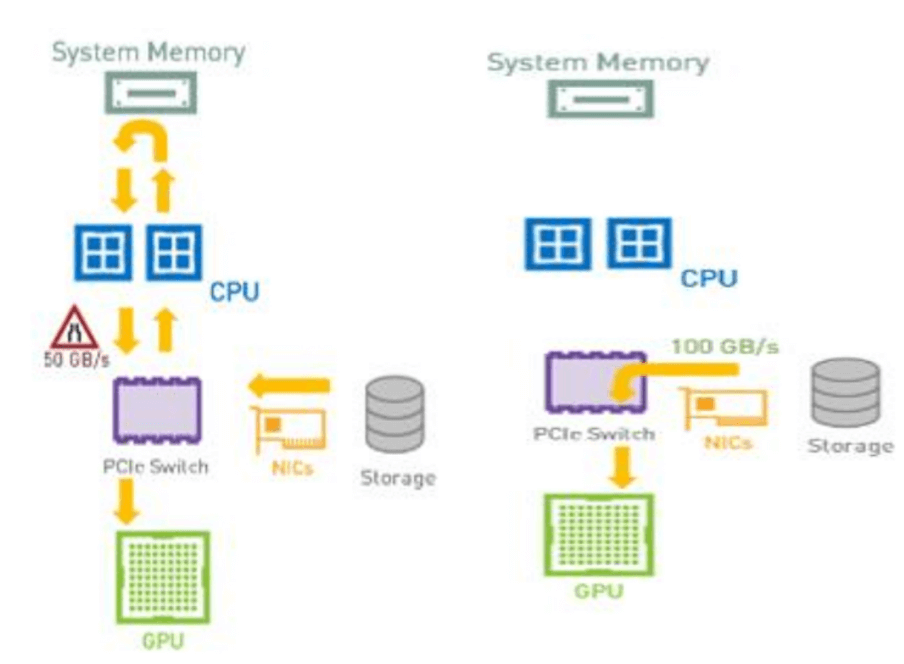 GDS solves that issue elegantly, again by exploiting DMA or RDMA capabilities from the storage. As Figure 2 shows, if the storage subsystem supports (R)DMA, it can be instructed to move data directly to a GPU Memory address as opposed to a SYSMEM memory address, thus bypassing the CPU/SYSMEM complex altogether. This permits data transfer to the system at near line speeds, as it is no longer limited by the internal memory bandwidth.

VAST Data is a modern all-flash NVMeNVMe is a new protocol designed specifically to provide systems access to non-volatile memory devices like SSDs. NVMe has much lower overhead, and allows much more parallel I/O than the older SCSI protocol. architecture that breaks the trade-off between performance, scale and cost. By using a combination of NVMeoF, Storage Class MemoryStorage Class Memory is a new non-volatile memory technology that has much lower latency and much higher endurance than NAND Flash. VAST Universal Storage Systems use Storage Class Memory SSDs to store system and element store metadata as well as as a write buffer. and QLCA class of SSDs designed to deliver the capacity and reliability required by hyperscale storage systems without the additional cost of the “enterprise” features required by legacy storage architectures. Hyperscale SSDs: • Use high bit/cell flash (4 bit/cell QLC and/or 5 bit/cell PLC)
• H... NAND technology in a cache-less architecture, we have delivered record breaking performance, hyper-linear scalability and costs approaching the economics of hard-drive based systems. A VAST ClusterA VAST Cluster is the set of VAST Servers and VAST Enclosures that make up a single management domain and namespace. presents itself to client systems through industry standard protocols – NFS, NFS over RDMA, SMBServer Message Block is the file protocol developed by Microsoft. The now obsolete and deprecated version 1.0 was known as CIFS. Primary file protocol for Windows and OS X. and S3, with support for a Kubernetes CSI in a container driven world.

When we started to work with NVIDIA in early 2020, we quickly realized, along with NVIDIA GDS Engineering, that we expose ourselves as an RDMA target to the DGX-2 systems we had been testing. NVIDIA GDS engineers had already experimented with GDS working on NFS systems that support RDMA, and had been on the lookout for a commercial storage system that supported it. We were eager to test this, and astonishingly, VAST NFS over RDMA worked with GDS literally out of the box – we had usable results in a few hours with no modifications to our system.

This started a highly productive collaboration between us, and with some larger systems, we quickly showed that we can achieve line rate bandwidth with a DGX-2 system. Shown below in Figure 3 is the VAST UI delivering data to a DGX-2 system with 8 x 100 Gb HDR100 IB NICs, delivering a sustained 94+ GB/s 1 MB IO Size Read throughput (we have recorded as high as 98 GB/s). One of the key points to note here is that this throughput was delivered via a single NFSoRDMA mount point to a single client DGX-2 system, which is unprecedented for NFS. 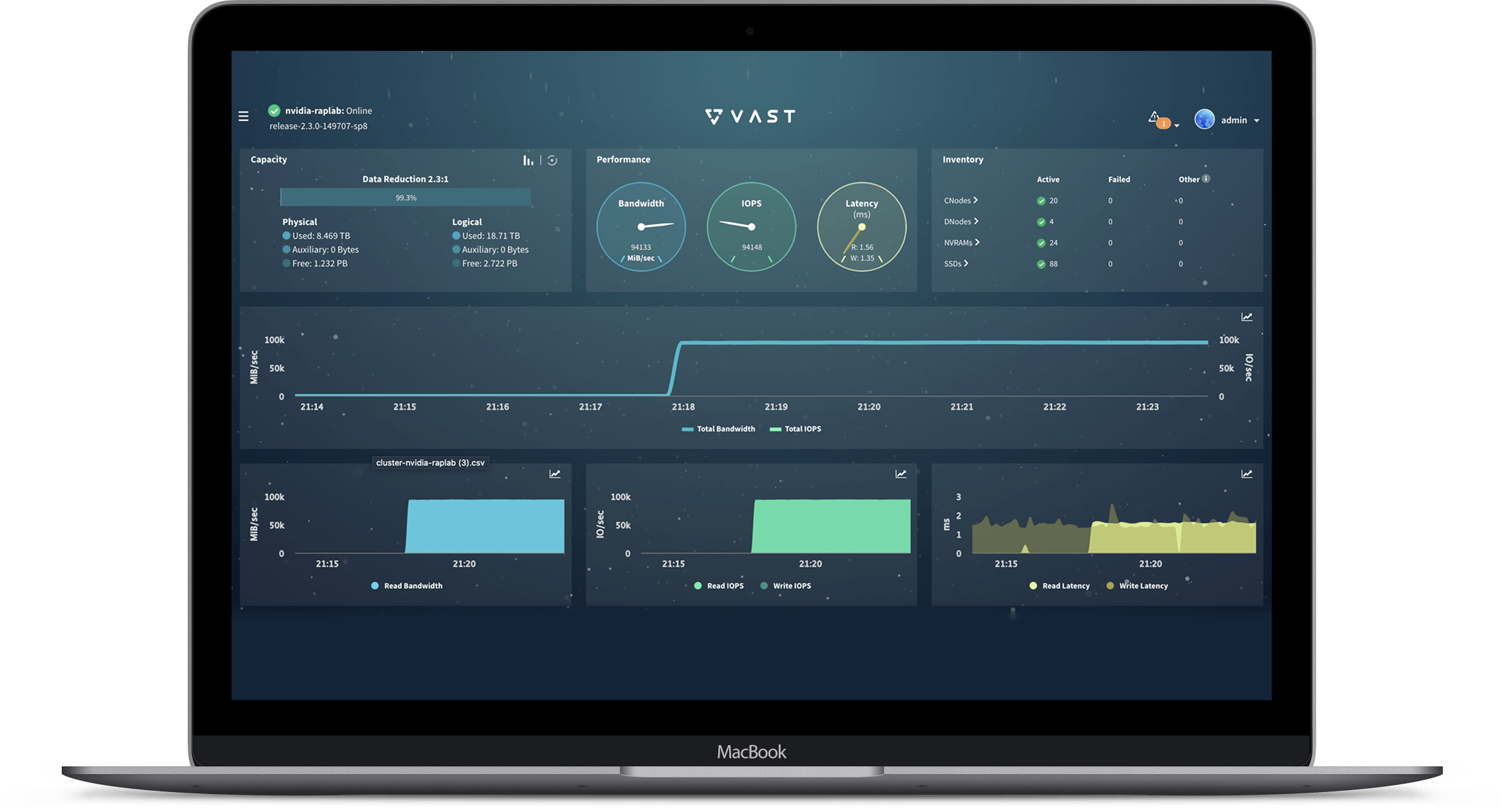 Probably even more interesting was the fact that the effect of bypassing CPU/SYSMEM was dramatic for the CPU utilization of the system. The Figure 4 shows data moving to the GPU using the traditional path (as shown in Figure 1) and achieving no more that 33 GB/s before saturating the CPU. In contrast, in Figure 5, we get near rate line bandwidth but with only 15% CPU utilization as seen in htop.

The Next Chapter: GDS with the DGX A100

In the middle of 2020, NVIDIA announced a new DGX Platform based on the revolutionary A100 GPUs, an innovation that we eagerly awaited for along with the rest of the industry. The system architecture used 8xA100 GPUs, AMD Epyc (Rome) processors and 8 HDR 200 Gb NICs, with a theoretical line bandwidth of 200 GB/s on a single system – clearly a head-turner!

As GDS is not yet generally available (as of this writing), we also published a joint NVIDIA/VAST Reference Architecture for the DGX A100 systems without GDS. All the measurements were conducted by NVIDIA in their labs. The curious reader should download and study the details in this RA. To highlight some parts of it, the results from running MLPerf with 1 to 4 DGX A100’s is shown below.

The MLPerf Training (v0.7) benchmark tests the well-known Resnet-50 Residual CNN image classification benchmark on the Imagenet dataset (typically run under MXNet, Tensorflow or Pytorch), and the results we obtained show impressive linearity in scaling as well as state-of-the-art images/second. However, even more impressive is that Epoch 0 (the first training pass over the data) which typically is data straight from the storage subsystem, with nothing in the file system buffer cache, has a near-zero difference with the overall average for all Epoch’s. This shows that the VAST cluster performance is as good as subsequent epochs where the data can come from system memory! Back to GDS on the DGX A100’s…

We were not disappointed when we had the opportunity to test GDS on a VAST Data Cluster against a DGX A100 server. We achieved a maximum of 162 GiB/s Read Throughput – which appears to be the maximum the system can deliver, fully saturating the capabilities of the DGX A100 system. The results below were from benchmarking performed by NVIDIA (not by VAST) and were shown and published in the NVIDIA GTC 2020 Fall Conference. 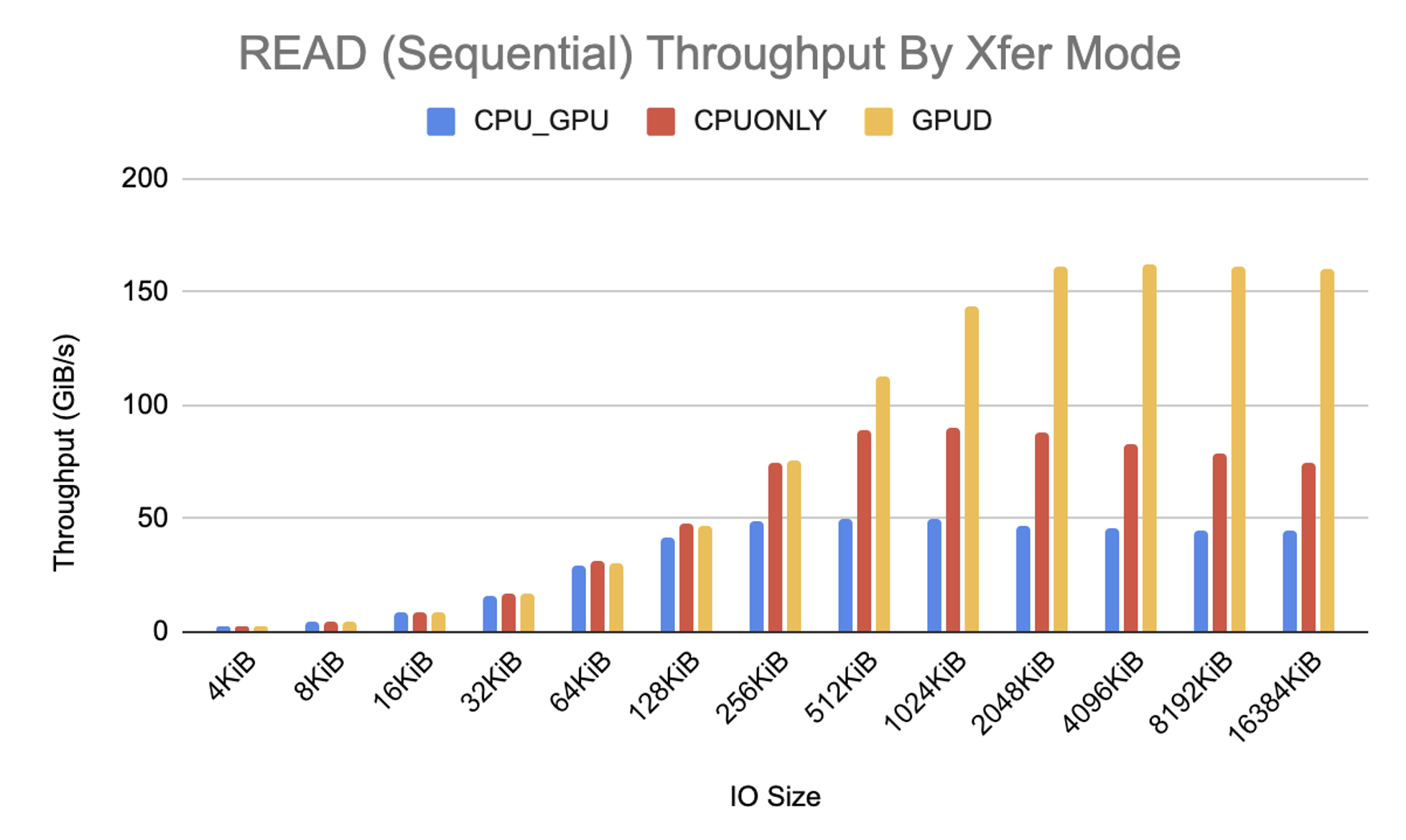 VAST Data one of a few select vendors that supports GDS officially at launch by NVIDIA, which is currently expected to be generally available in 2021. More ecosystem work is expected to be completed in that time frame as well, with support for the NVIDIA cuFile APIs (necessary to exploit GDS capabilities) in major Deep Learning Frameworks such as Tensorflow, PyTorch and MXNet, as well as exploration of new use cases for this work.

The interest in this from our customer base is unprecedented. Many of our customers who have purchased DGX A100 systems are planning to use that with VAST systems, with or without GDS, as VAST Data offers a scalable, highly performant and cost effective platform to base their Deep Learning workloads on without any compromises. 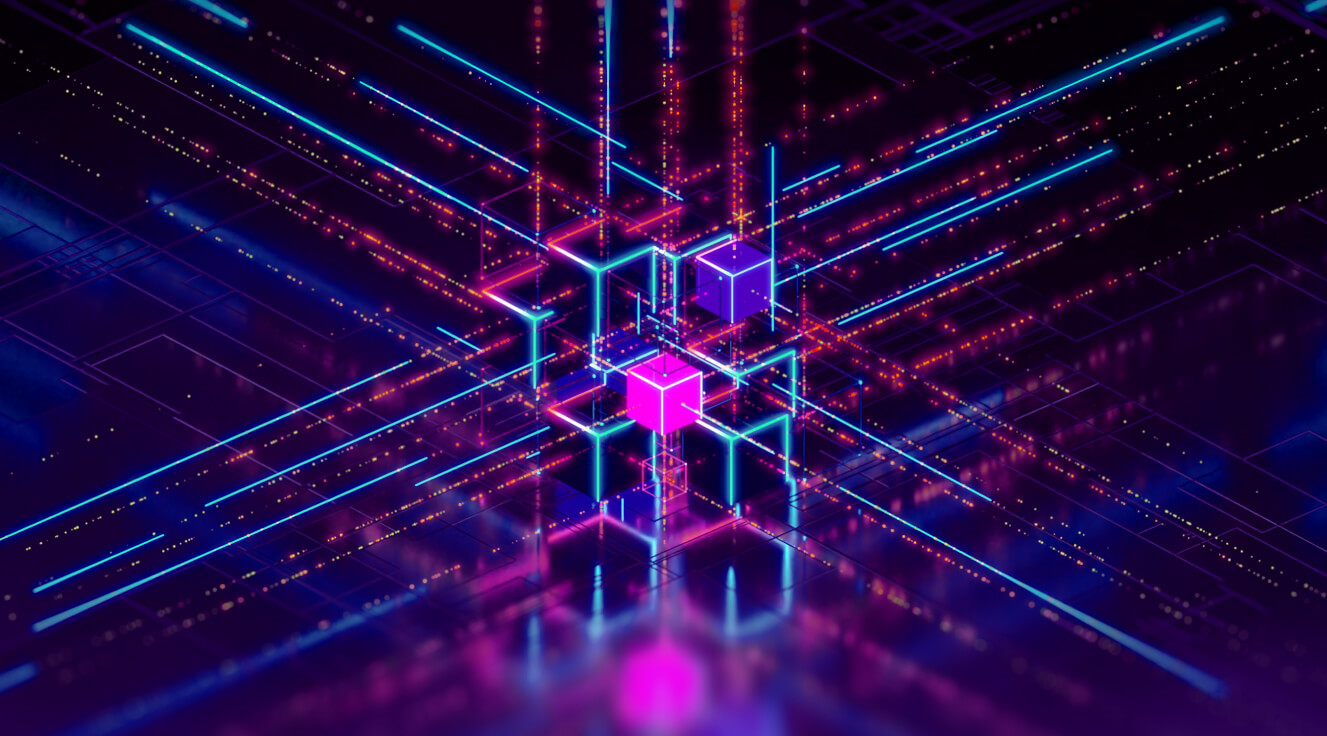 When shared-nothing scale-out storage was the next big idea, we heard a lot about the promise of RAIN clusters that would logically live forever.  When products actually came to market...