While I’m not a big fan of industry predictions, they are a bit like death and taxes in the storage industry… can’t avoid them. In the process of working up our calls for 2021, I found myself thinking about the diversity of use cases VAST Data has encountered this year and how a surprising number of them called for capabilities well beyond what users have been accustomed to getting from NFS. Since I’m a fairly busy bee, I don’t always have the chance to sit back and see the big picture, but our end-of-year thinking has slapped me in the face with an absolute truth that I didn’t fully appreciate whilst jumping from deal-to-deal throughout the year… here goes:

Legacy (TCP, unipath) NAS will not survive the jump to 4th generation PCIe

Now, there will be use cases which of course are an exception to this rule, such as home directories that serve desktops, but any file system client machine that’s looking to make use of all of its processing cores and/or drive efficient use of accelerators (GPUs, FPGAs, etc.) are now forced to abandon traditional NAS options as PCIe Gen4 sets into the market.

The Core of the Issue

To start this off, let’s set the foundation of this discussion around the definition of ‘legacy’ and where this problem emerges from how NFS was originally architected.

Enter CPUs and Moore’s Law. Squeezing out nanometers is hard, and clock frequency gains are even harder to achieve. As the process of increasing core frequency has hit a wall, the CPU manufacturers introduced multi-core designs to encourage application parallelism. Intel introduced its first dual-core processor in 2005. The Intel® Pentium® Processor Extreme Edition 840 ran at 3.2 GHz … and 15 years later their fastest Xeon® 2nd Generation Scalable Processors top out at 3.8GHz. 15 years, and only 19% more compute resources for TCP overhead handling.

The knee in the evolutionary performance curve of single NFS mountpoint performance can be seen very clearly in this overview of how processors have evolved over the past 5 decades (focus in on the plateau in Frequency (MHz)):

Performance-wise, a single 3+GHz core can drive about 2GB/s (16Gbps) of NFS traffic per client. This end of Moore’s Law for single-core performance improvements has resulted in a very awkward waltz between NFS and CPUs over the years.

Admittedly, the above is mostly theoretical, so let’s put single-core NFS over IP and NFS over RDMA performance into perspective, when comparing to modern client processors.

As per the above, a few things become clear when applied against modern processors:

PCIe Gen4… the reckoning for single-core and IP-based NFS

We’ve been waiting for the broad availability of PCIe gen4 hardware for years, and with the imminent release of Intel’s first Gen4-based server architectures, we’ll finally be to the point where a single lane of PCIe Gen4 will drive as much NFS/IP traffic as a single core can support. The evolution of PCIe performance continues to outpace core frequency and CPU HW assist evolutions. CPUs have bumped into the limits of the speed of light – and legacy NFS is the victim. At the high end, AMD architectures have 128 lanes of Gen4 PCIe per socket… establishing an I/O imbalance that’s two orders of magnitude large… and the problem will only double when PCIe Gen5 systems start shipping in 2022.

Despite its performance shortcomings, NFS is great for the simple reason that it’s a battle-tested standard and customers love standards and most people don’t want to confuse their operating system agenda with their storage agenda. Parallel file system drivers that must be installed and maintained on host machines have always added a layer of complexity that shows its head most often during host or storage upgrade events, as there are always firmware interdependencies with the host OS and the file system driver.

Fortunately, there is hope. In the past 10 years, the market has up-leveled the NFS client to support the rising requirements of the multi-core era. While much of the legacy old-guard NAS market hasn’t evolved with NFS, VAST Data has.

The recipe for standards + performance is surprisingly simple:

RDMA + Multiple Connections + GPUDirect Storage = 81,000% more performance than legacy NAS. When we started working with them, NVIDIA prototyped all of the GDS work on their own, such that there were no server-side modifications needed to drive very fast performance even in the earliest days. That’s the benefit of having a standards-based, linearly-scalable architecture as we’ve engineered at VAST Data.

As mentioned at the beginning… this story is bigger than just AI, although it must be said that deep learning training may not run effectively at all without these enhancements. We see the need for significant client bandwidth beyond AI in the media space, in life science, in big data analytics, in HPC… even in enterprise backup environments. These applications have always had a good appetite for data.

The applications haven’t changed, but the underlying computing infrastructure has, and legacy NFS has not evolved in a manner consistent with how processing architectures and applications have evolved. It will be interesting to see if and how the scale-upA storage system architecture that allows storage systems to scale in capacity by adding drives (flash or spinning) to one or two controllers that provide a fixed amount of processing power. Compare to Scale-out. More and scale-outScale-Out storage systems allow users to grow a system by adding compute power along with media in the form of HDDs and SSDs. Scale-Out storage systems can usually scale larger than systems based on the older scale-up architecture. Compare to Scale-up More toaster companies of yesterday re-work their architectures. Fortunately, this new “NFS Express” is faster than ever and couples with VAST Data’s Universal StorageUniversal Storage is a single storage system that is fast enough for primary storage, scalable enough for huge datasets and affordable enough to use for the full range of a customers data, thus eliminating the tyranny of tiers. More to make it simple for customers to marry their evolving compute agenda with storage that’s fast, scalable and standards-based (so, easy to operate). This is one of the many reasons why IDC calls VAST Data’s new concept “the storage architecture of the future”.

To learn more about how to unleash your file applications, just reach out to chat. 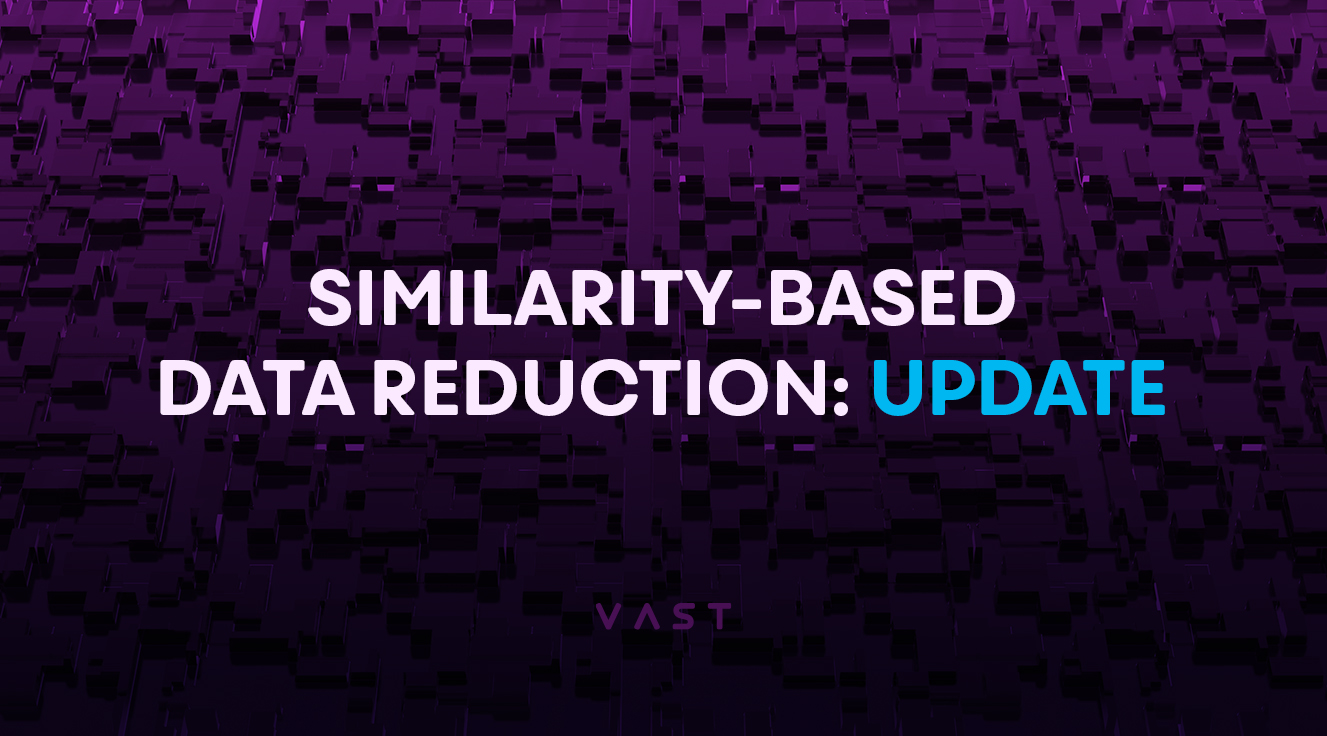 For many applications, data reduction is one of the keys to bringing the cost of all-flash storage more inline with what customers have historically spent for disk. With the release of VAST version 3, we now have more than a year of experience with data reduction across our customers...